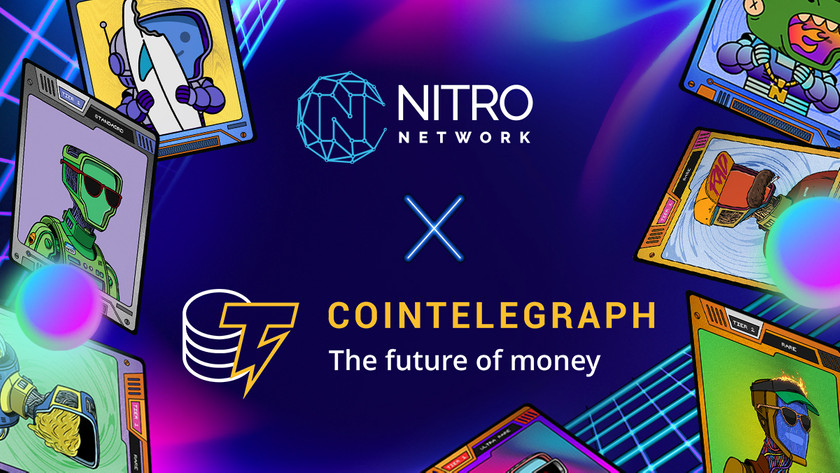 Over the past few years, nonfungible tokens (NFTs) have become a multibillion-dollar industry and have solidified themselves among the most tech savvy. They have opened the portal to infinite possibilities and carved out a new direction for the future of the internet. Enter Nitro Network, which is set to revolutionize the NFT space and take it to new heights. With its groundbreaking Non-Fungible Miners (NFMs), Nitro Network will solidify the decentralized web, all while offering generous rewards to its users.

That is why Cointelegraph has partnered up with Nitro Network, to pioneer the future of a decentralized internet through the Non-Fungible Miner. NFMs are a unique innovation — an NFT that provides all users the ability to digitally mine Nitro’s native token, NCash, from anywhere in the world. For the end-user, Nitro has made crypto mining a fully digital experience, one where they don’t need to hold and manage their own physical miners. In addition to enabling users to digitally mine, each NFM currently offered by Nitro comes in the form of a Nitro Bot NFT, which has its own value structure and rarity levels.

Nitro is now offering three tiers of “Nitro Bot NFMs,” sold via its website. Each location-based NFM provides a generous reward structure and a unique NFT. For example, Tier 1 NFMs are connected to premium locations such as New York City, London and Dubai. These NFMs yield the highest rewards and come in the form of the rarest Nitro Bot NFTs.

Nitro’s digital miners provide additional value as well. Not only do you get your rewards and NFT instantly, but you can also purchase as many miners as you want without having to worry about storage space, hardware shortage, shipping delays, electricity costs or set up!

Alongside allowing users to digitally mine and earn massive rewards via an NFM, Nitro enables select users to host a network point called a “Nest.” These Nesters will be the backbone for a new decentralized internet. All Nests will be geographically distributed to maximize coverage and scalability with no overlap. This will ensure there is no competition between hosts, and it allows each user to maximize their rewards. You can apply to be a Nitro Nester and get a miner shipped to you for free.

By creating a decentralized internet run by Nitro’s own users, people can possess full knowledge of and control over where their data is and how it’s being used. Moreover, when the network is fully deployed, communities across the globe will be able to interact and engage with smart city technology on the Nitro Network. A new era is upon us!

Cointelegraph conceptualized and designed the Nitro Bot NFTs, which double as one’s digital NFM. When engineering the NFMs, Cointelegraph wanted to encapsulate multiple facets of what drives value for NFTs by incorporating utility, a rewards structure, dynamic rarity traits, sensational art aesthetics and an array of unlockables. By joining forces with Nitro, Cointelegraph is becoming an active participant in building the Web3 future that it has been covering and watching evolve for nearly a decade.

The best part is that the Nitro NFM presale is happening right now! Those inspired to preorder a miner and reserve their spot in the decentralized internet should head over to Nitro’s website and join its social media channels: Twitter, Instagram, Discord, Telegram, Reddit.

How to resurrect the ‘Metaverse dream’ in 2023 – Cointelegraph Magazine

Bitcoin One of the Best Performing Assets in 2023: Bloomberg Intelligence

Bitcoin One of the Best Performing Assets in 2023: Bloomberg Intelligence