Dogecoin cleared a resistance at $0.072 but is now crashing below

Meme coins started the week on a high note as risk-on sentiment gripped markets. That saw Dogecoin DOGE/USD touch $0.0913 for the first time since May. The token had successfully cleared the $0.072 resistance and turned it into support.

The gains in DOGE underline investors’ interest in risky assets at the slightest of positive information. A week ago, data showed cooling inflation numbers, which boosted most cryptocurrencies. That could have attracted meme token buyers. DOGE and SHIB became top gainers at the start of the week.

Nonetheless, a Fed report this week spooked markets as officials pointed to more rate hikes. The developments could have brought caution, alongside profit-taking, which forced a sell-off in DOGE. The token now faces a further slump if bulls fail to arrest the bear momentum. 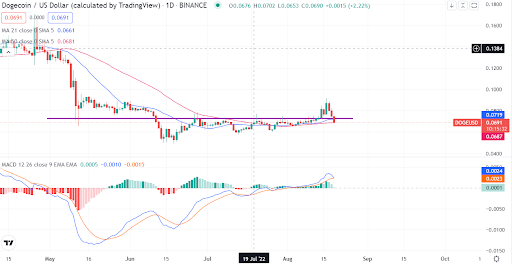 The technical outlook reveals that DOGE has breached below the 0.072 support and 21-day MA. The token is about to break below the 50-day MA. The MACD line remains above the moving average, but the momentum is weakening.

While we can’t confirm the bearish momentum now, DOGE remains vulnerable. The token could slide further to touch the $0.06 support. Investors should consider buying if the token successfully recaptures $0.072.

Dogecoin is bearish after a meme-inspired rally this week. Profit-taking and investor caution around the Fed decision could be behind the current weakness. DOGE will turn bullish if the token reclaims the $0.072. Otherwise, expect the price to fall further to $0.06.

Bitcoin, Ethereum Turn Volatile Ahead of the Merge

Cardano falls back to the bottom of the consolidation zone. What next?

DYGYCON 11 Will Start the 23rd of September

Are there too many cryptocurrencies?

DYGYCON 11 Will Start the 23rd of September