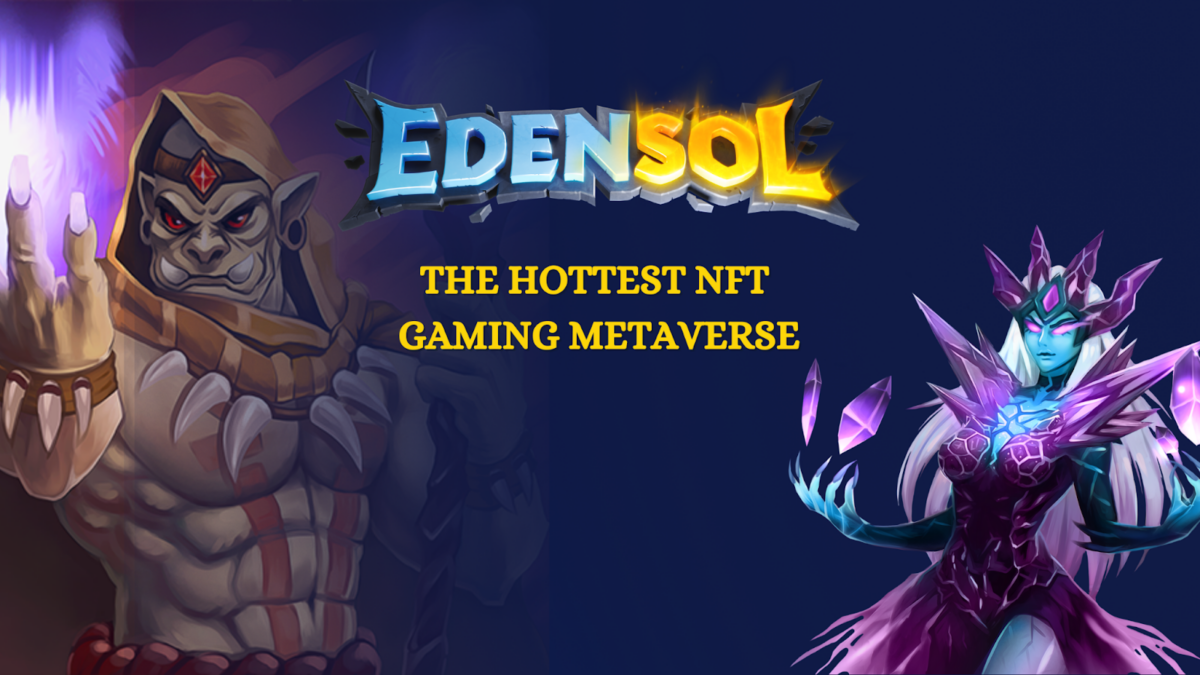 NFT Metaverses became by far the hottest trend in the gaming universe in 2021. The explosive success of games like Axie Infinity, which has sold over $3 billion in NFTs, looks like the beginning of a new era where gaming meets crypto – and gamers can finally reap extraordinary rewards for their talents.

The advantages of NFTs for gaming are massive:

They turn in-game assets (characters, costumes, weapons, and more) into unique and valuable crypto tokens that can be traded and collected for profit.The Play to Earn (P2E) model enables the most talented games to earn NFT rewards for their gaming performance and victories –  a first in the history of global gaming.They represent an unprecedented and highly attractive asset class for investors, who can benefit financially from the growth of the most successful gaming ecosystems and the intrinsic rarity of each NFT.

A new game is about to take the sector by storm – Edensol. Built on the highly versatile and powerful Solana Blockchain, Edensol is the ultimate action role-playing NFT game developed by Golem House.

While new NFT games are being released in growing numbers, the Golem House team developed Edensol to stand out in the space, thanks to its potential for long-term growth and a positive gamer experience. The clear realization is that the NFT advantage, while powerful, can only turn a gaming Metaverse into a resounding global success if the gameplay is exciting and addictive.

That is why Edensol brings to the space a thrilling combo of fantasy, action, competition, and unbeatable rewards:

Extraordinary Gameplay – Edensol is both enthralling and competitive. Players can choose to be unique Heroes (Warriors, Rangers, and Mages) who fight Monsters on unforgettable quests. Alternatively, they can choose to fight other Heroes one-on-one to establish who the greatest really is – and who will receive a bounty of NFT and NSOL token rewards.

Valuable NFTs – Edensol was designed with an obsessive focus on making all in-game NFTs uncompromisingly original, valuable, and collectible by enthusiasts and investors alike. The range of potential NFTs is unrivaled: special weapons, enhanced battle gear, limited edition clothing, pets, eggs, and much more. This makes sure all gamers and NFT collectors can find something they like, while the rarity component lights the fire of long-term price gains.

An Ecosystem Designed For Growth – Solana is made to scale, thanks to its mind-boggling speed (710,000 transactions per second) and transaction costs as low as $0.0001 – virtually nothing. By building on Solana, Edensol provides a fast and low-cost way to actively buy and trade NFTs compared to the more costly Ethereum-based alternatives. In addition, with the 5th biggest crypto market cap in the world and cross-chain compatibility, Solana enables Edensol’s NFTs to be always liquid.

Epic Tournaments – Tournaments are where Edensol becomes a spectator sport, and the ultimate public arena for players worldwide to measure their skills against each other. Players can freely participate and win awards including Edensol’s native cryptocurrency, the ESOL, and a wide range of valuable NFTs. In addition, eSport lovers can stream matches and actively bet on the outcome with ESOL, together with players – ultimately boosting the game’s popularity and engagement.

Land NFTs & Guilds – Land NFTs are tied to territory within a determined Metaverse, which grow in value and generate passive income as the game attracts more players and NFT investors. Edensol’s world is subdivided into land parcels which can be conquered by Guilds, groups of players that stake NSOL tokens to occupy land and fight for rare NFTs. Guild members share earnings from land income and can go on raids to conquer more land from other Guilds – building a valuable virtual land NFT empire.

The action and excitement of the NFT metaverses are firmly on the radar of the investors, who are making big bets on the sector:

Sidus Heroes raised over $21 million in its IDO.Gamers invested $203 million in the Ember Sword’s NFT digital land sale in August 2021.In its public round of fundraising, MOBA game SolChicks raised $20 million at a $400 million valuation in November 2021.

Edensol is an NFT metaverse aimed at dominating this new era and becoming a recognized name among the gaming, NFT investing, and VC communities. By leveraging its unique gameplay and NFTs, both investors and gamers are positioned to benefit from its immense growth potential.

Dash 2 Trade Announces Overfunding Round and Listing on Gate.io

Flow and Avalanche Increasing but Snowfall Protocol is the Real Winner

Top Cryptocurrencies to Purchase in Q4

Stripe Touches Down on Solana With Orca DEX Integration