Gala Games (GALA) just a few weeks ago was surging to unimaginable rates. At one point, the blockchain gaming token reported gains of 60% in seven days. But much of that momentum has gone, and we expect some bearish price movements in the coming days. Here are some highlights:

Gala Games (GALA) could fall to $0.2 if we are going to see some bullish reversal.

The token is currently trading at around $0.25, literally unchanged in the last 24 hours.

Upside potential remains minimal at best, and GALA could struggle to hit $0.4. 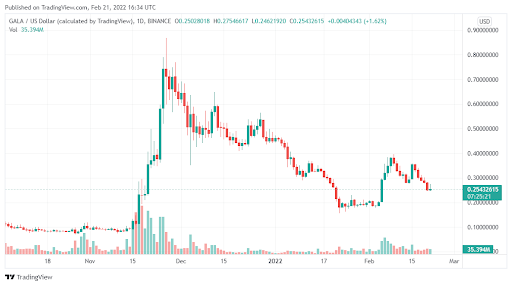 The metaverse and blockchain gaming craze that we saw last year was quite instrumental in the growth of GALA. In fact, the coin managed to surge towards all-time highs in November last year, hitting a price of around $0.84.

But this bullish momentum hasn’t been replicated in fact, GALA is now trading 82% lower from those highs a few months ago. Despite this, we did see some bullish breakout at the start of February. In fact, at one point GALA reported 60% growth in less than a week. That bullish breakout has now slowed, and it seems the gaming token is sliding.

We expect it to flatten at the $0.2-mark before bulls try to find any demand. Also, based on the charts and the recent price action, it seems any bullish uptrend for GALA is capped at $0.4.

Well, metaverse and blockchain gaming tokens are expected to remain some of the most in-demand assets in the market. While it is likely that we will see other stronger, more powerful metaverse projects in the future, there is no question that Gala Games is a big pioneer. For investors who want some exposure to this new virtual world, then it should be a decent option to buy.

Macroeconomic data points toward intensifying pain for crypto investors in 2023

NEXO risks 50% drop due to regulatory pressure and investor concerns

Is BabyDoge Top Dog When It Comes to Memecoins?