This month, the Board of Governors of the United States Federal Reserve System issued its widely anticipated report on the nation’s possible use and adoption of digital currencies for its financial system. The document is titled “Money and Payments: The U.S. Dollar in the Age of Digital Transformation,” and true to its name, the paper is transformative.

Powers On… is a monthly opinion column from Marc Powers, who spent much of his 40-year legal career working with complex securities-related cases in the United States after a stint with the SEC. He is now an adjunct professor at Florida International University College of Law, where he teaches a course on “Blockchain & the Law.”

For those who are regular readers of this column, in December, I identified the top five events in blockchain in 2021. One of those was the comments from Fed Chairman Jerome Powell on his openness to digital assets and a possible co-existence of Fed legacy money and financial systems and cryptocurrencies. He stated in public hearings that there was no current need to ban crypto and that he saw value in stablecoins, if properly regulated.

I also opined in that column that the Fed’s endorsement and issuance of a central bank digital currency seemed to be forthcoming. Well, that is precisely what the report says, though there is typical hedging with disclaimers and Washington doublespeak. Given the significance of the U.S. creating and adopting its own CBDC, the paper is worth highlighting.

The Federal Reserve System and a CBDC

Before getting into the paper’s content, let’s see how the Fed self-identifies:

“The Federal Reserve System is the central bank of the United States. It performs five general functions to promote the effective operation of the U.S. economy and, more generally, the public interest.”

Those five functions are: 1) conducting the nation’s monetary policy, 2) promoting the stability of the financial system, 3) promoting the safety and soundness of individual financial institutions, 4) fostering payment and settlement system safety and efficiency, and 5) promoting consumer protection and community development.

The paper is meant to be the “first step” in a public discussion between the Fed and stakeholders about CBDCs, which it defines as a “digital liability of a central bank that is widely available to the general public.” The paper cautions that it “is not intended to advance any specific policy outcome,” but the publication of the paper itself does just that. Most often, simply raising an issue has the effect of increasing recognition and acceptance of the topic.

The paper identifies three forms of money: central bank money, commercial bank money and nonbank money. Fed money has no credit and liquidity risk, bank money has some, and nonbank has the most because it is not subject to rigorous rules and supervision and cannot offer Federal Deposit Insurance Corporation insurance on deposits. Related firms like PayPal conduct balance transfers on their own books using various technologies, such as mobile apps.

Central bank money is a liability of a central bank, commonly known as “fiat” or “sovereign” currency, and can exist in physical form like banknotes or as digital balances held by commercial banks at the Federal Reserve. Bank money is generally deposits commonly used by the public and can be in digital form. While there have been improvements in recent years to the traditional, or legacy, financial system — such as the digital real-time payments network and planned debut of the FedNow Service in 2023 — the paper recognizes there are still challenges. One is in the area of cross-border payments, which presently have slow settlement times, high fees and limited accessibility.

Another challenge is the significant number of Americans still, in 2022, lacking access to digital banking and payment services. Over 5% of U.S. households, or over 7 million Americans, remain unbanked, even though that percentage has decreased from 8.2% over the past 10 years. 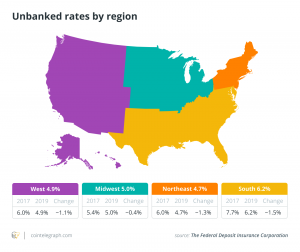 Some of the explanations given by unbanked people include that they lack sufficient funds to meet the minimum deposit to open a traditional bank account, distrust banks, have privacy concerns or that bank fees are too high. All of these seem strikingly similar to the reasons given by Satoshi Nakamoto back in October 2008 for creating the Bitcoin blockchain. The Fed’s paper also states that an additional 20% of households have accounts with banks but rely on more costly financial services such as check-cashing services, payday loans and money orders. That totals an astonishing 35 million Americans either unbanked or underbanked!

Given the challenges, the paper discusses the recent use of digital assets with money-like characteristics, such as cryptocurrencies and stablecoins. Significantly, it references the President’s Working Group on Financial Markets’ report released last November, which notes that “If well-designed and appropriately regulated, stablecoins could support faster, more efficient, and more inclusive payments options.” Ahem. This is something private businesses and crypto traders have known for maybe five years already! But it’s good that our government officials are at least now realizing these benefits.

The paper concludes by laying out how a CBDC might fit into the U.S. money and payments landscape. It raises the design requirements for the protection of privacy, the way a CBDC might interfere with traditional methods used by the Fed to regulate the U.S. economy, its need to be accepted by and widely transferable among various intermediaries and customers, and the need to be able to identify and combat money laundering and the financing of terrorism. To me, some of the most revealing sentences in the paper, showing Powell’s hand, include the discussion in the section “Potential Benefits of a CBDC.”

— “A CBDC could potentially serve as a new foundation for the payment system and a bridge between different payment services, both legacy and new.” This is something the international regulatory think tank Global Digital Finance wrote about back in October 2020 in its paper “The Age of Public Digital Currency: A Guide to Issuance,” of which I was a contributing author.

— “A U.S. CBDC would offer the general public broad access to digital money that is free from credit risk and liquidity risk.”

— “Another potential benefit of a U.S.-issued CBDC could be to preserve the dominant international role of the U.S. dollar.” This is a topic and concern I wrote about in February 2021.

— “Some have suggested that a CBDC could reduce common barriers to financial inclusion and could lower transaction costs, which could be particularly helpful for lower-income households.” This is certainly a worthwhile benefit and something I can see the Biden administration wanting and getting behind.

A final noteworthy fact stated in the paper is the decline of cash and banknotes. Cash use has fallen from over 40% of transactions in 2012 to 19% in 2020. Given all of this, it will be interesting to see and hear more on this from the Fed and other government agencies and officials in the coming months.

Marc Powers is currently an adjunct professor at Florida International University College of Law, where he is teaching “Blockchain & the Law” and “Fintech Law.” He recently retired from practicing at an Am Law 100 law firm, where he built both its national securities litigation and regulatory enforcement practice team and its hedge fund industry practice. Marc started his legal career in the SEC’s Enforcement Division. During his 40 years in law, he was involved in representations including the Bernie Madoff Ponzi scheme, a recent presidential pardon and the Martha Stewart insider trading trial.

The opinions expressed are the author’s alone and do not necessarily reflect the views of Cointelegraph nor Florida International University College of Law or its affiliates. This article is for general information purposes and is not intended to be and should not be taken as legal or investment advice.