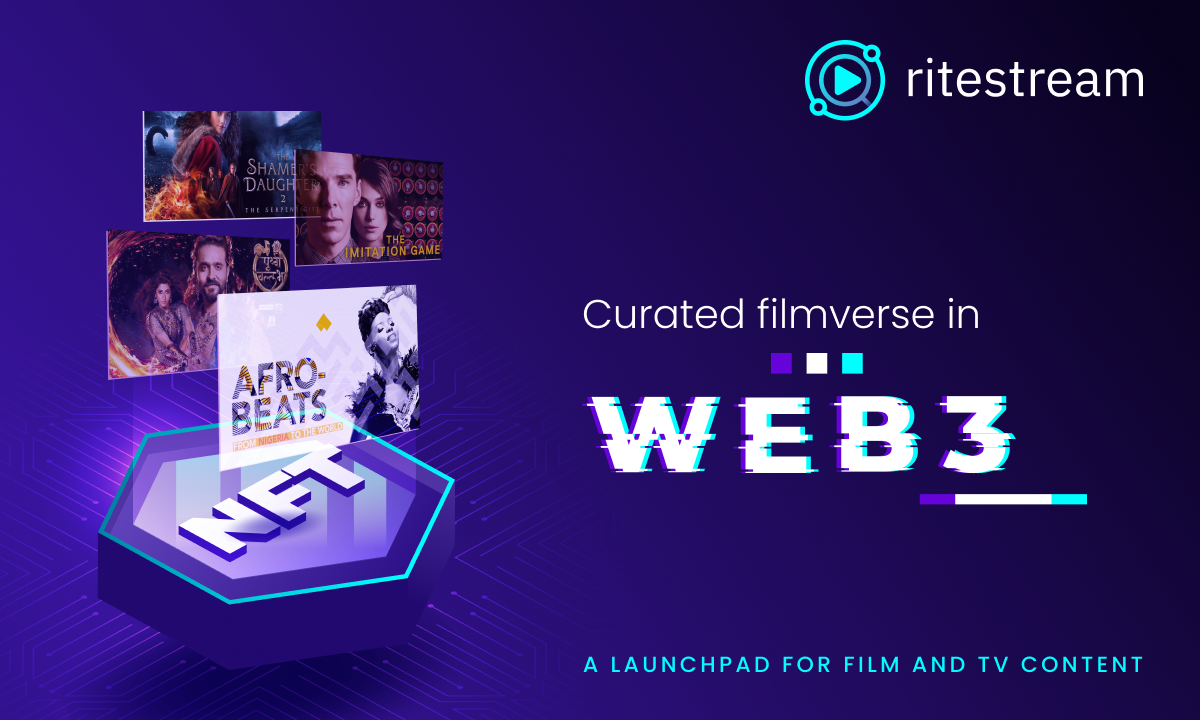 IMAGINE: Finally, a revolutionary ecosystem for the funding, monetization, and consumption of film and TV content.  A platform that leverages blockchain technology and exploits new revenue sources in Web3 such as streaming content in the Metaverse and NFT’s!

Step into a world where creators can bring their film and television projects to life in a matter of days.  Imagine a community-supported ecosystem where ideas and entertainment projects can be brought to life and generate revenues on the Metaverse!

Introducing ritestream:  an innovative content launchpad doing for movies and television what Axie Infinity did for gaming!

Producers of film and tv projects are well aware of the tremendous industry hurdles of successfully financing a new project. Re: the daunting task of pitching to networks, sponsors, and investors feels like a never-ending battle. As a result, thousands of great ideas never make it to the screen.   Another challenge is the monetization of content that has historically been controlled by middlemen.

Enter ritestream: a global marketplace and launchpad for the creation, monetization and distribution of film & television content.

Ritestream is on a mission to disrupt this antiquated model.

There are three layers to ritestream:

1. A launchpad, where film and tv projects are presented by creators and funded by the community

2. A marketplace where content is distributed and monetized through our existing revenue-generating and revolutionary Content As a Service model.

3. The consumer App: where content can be viewed and consumed. Audiences can rate and engage with content to earn tokens.

Creators and filmmakers will place their project idea on the platform where the community will fund concepts that they believe in.

(Investors can range from individual investors to major institutions. For example, if the creator of a project previously hosted on Netflix decides to do their next project on ritestream, Netflix could be an investor alongside the community.)

EXAMPLE: Different tiers of ownership could look like this: a $500 tier, a $1,000 tier, a $10,000 tier or even a $100,000 tier and so on. Tiers levels will have different ownership rights, i.e., larger tiers could receive an “Executive Producer” credit on the film, behind the scenes content, meet and greets with the cast and crew etc.

Tokens purchased for each film project can be traded on various exchanges upon launch of the project thereby making the investment liquid. Traditionally, if you invest in a film project, it could take YEARS to earn any sort of return.

Once the project is completed, it is minted in the form of a final NFT and distributed globally through ritestream’s marketplace platform.  The revenues generated will flow back to the Creator and fractional owners via ritestream’s native token the RITE coin on the blockchain.

Selected scenes from the films produced on the Launchpad will be minted as NFT’s and dropped to RITE coin holders via the ritestream NFT marketplace.  Revenues generated through these NFT drops will flow to the Creator as well as the fractional owners of the film via RITE coins.

The completed film/TV NFT is distributed and consumed in many different ways. One way is through the ritestream app, where people can watch the content and engage at various points by rating scenes, taking polls, and rating the final product.

Engagement will be rewarded with RITE tokens, which have value and can be used to view more content, fund content, or purchase specially-curated NFTs.  The data from the View to Earn mechanism will inform the creators about what viewers like or don’t like and also generate additional revenues through potential advertisers.

Ritestream will forever change the entertainment industry: how content is funded, how people consume content, and how it is monetized.   Most importantly Creators and the Community will engage at a deep level in the process of creation of film and TV content in a transparent and collaborative manner.  Want to follow along?

Join their Discord and their Telegram Group visit their website.

MachineFi Wants to Connect the World to Web3 Through W3bstream